Photo above: Witnessing public accountability: Rupesh (left), advisor to the Indian Supreme Court Commissioner on the right to food sits with his colleague Father Jose Kariakatt (centre) of the PUCL (People’s Union for Cilvil Liberties) to audit the midday meals program at the Madhya Vidayalaya school in Tetua village. The proper running of Bihar’s midday meals scheme is vital if the state is ever to tackle it’s terrible record on child malnutrition. Gaya District, Bihar. India ©Tom Pietrasik 2011

Earlier this week it was announced that that Suresh Kalmadi, the chief of Delhi’s 2010 Commonwealth Games committee had been arrested. It is alleged that his fixing of contracts for the procurement of timing equipment used during the games resulted in the government overpaying a Swiss firm by US$21million.

While revelations of Indian corruption are attracting much comment in the press, I have yet to see any photographs that contribute to our understanding the issue. Indeed, I read this latest disclosure in the Financial Times newspaper in an article by Amy Kazmin that appeared without a photograph to accompany her words. 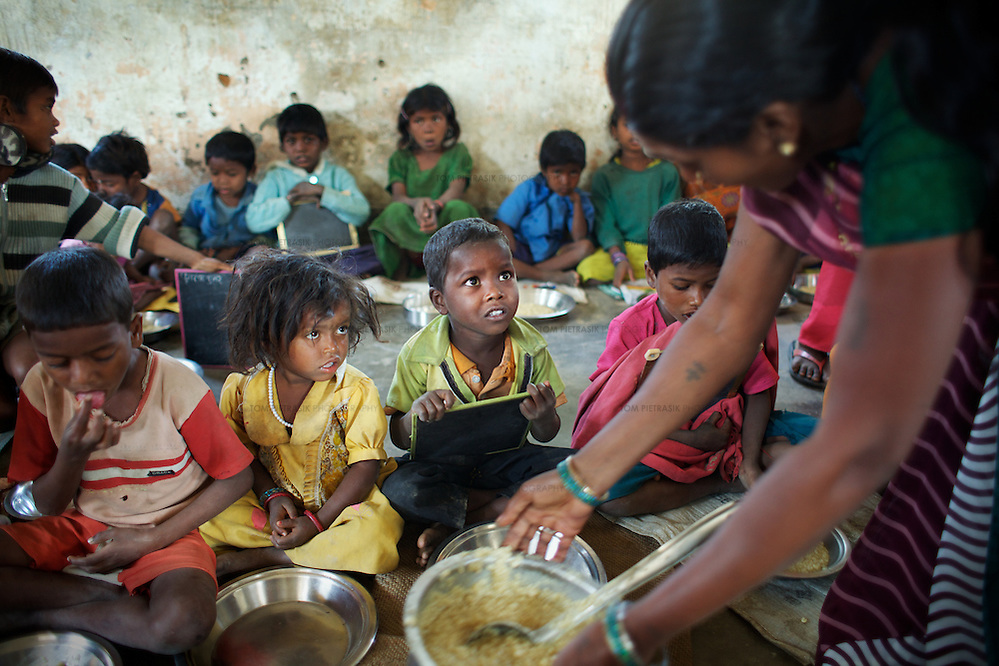 Potential victims of corruption: children receive their midday meals in Mananbigha village Anganwadi (child-care) centre. The proper running of Bihar’s midday meals scheme is vital if the state is ever to tackle malnutrition levels running at 56 percent among the under-5’s. Gaya District, Bihar. India ©Tom Pietrasik 2011

The Indian investigative newspaper Tehelka has famously used hidden video cameras to expose corruption but these images are principally concerned with gathering evidence and do not employ the skills of a photographer to illustrate the subject. Of course bribing someone is an illicit act and is rarely witnessed. So when a politician colludes with industrialists to deny the Indian people revenue that is by-rights theirs, how does a photographer go about illustrating the crime? 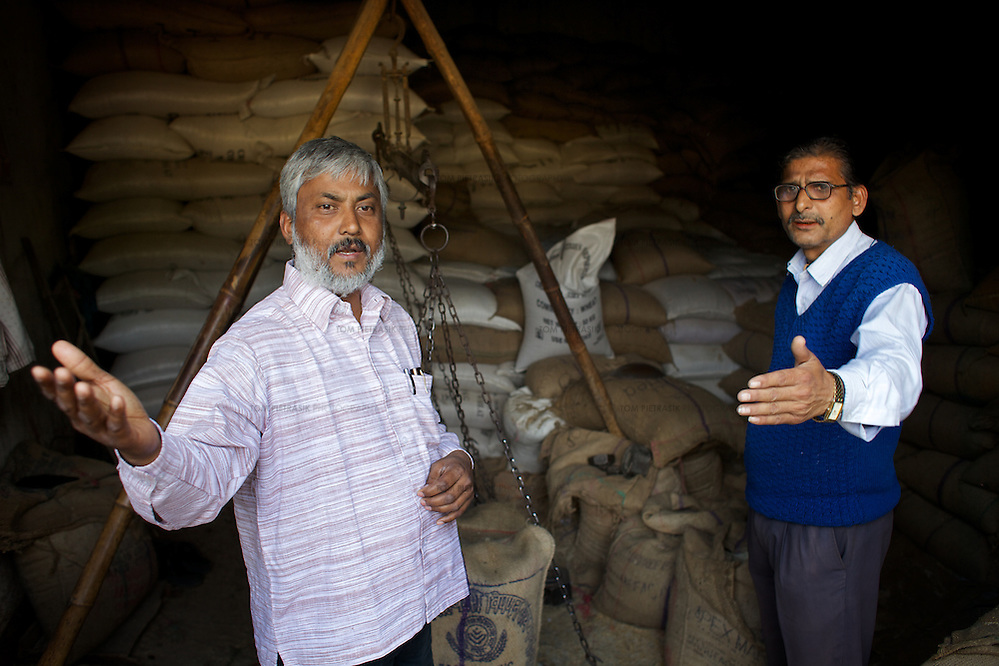 It is clear that acts of fraud and bribery are incredibly difficult to photograph but I did recently have the privilege of witnessing first hand, the work of those whose responsibility it is to confront corruption by holding public officials to account.

It was in Gaya District in Bihar state, while I was gathering stories of hunger and malnutrition for Oxfam, that I found myself in the company of Rupesh who is an advisor to India’s Supreme Court Commissioner on the Right to Food.

Rupesh, who goes by one name only, is one of those people who’s dedication and commitment to his job goes well beyond the call of duty. Refreshingly unsentimental in his approach to the task of uncovering corruption and equipped with a dry sense of humor that undoubtedly provides respite from the depressing nature of his work, Rupesh is charged with a responsibility to uphold the Indian Constitution that guarantees life to all Indians. This right – it goes without saying – cannot be granted without access to food.

Rupesh was accompanying me as I photographed a food distribution depot in the town of Atri when he found himself surrounded by retailers responsible for supplying food to those who qualify for rations under India’s Public Distribution System (PDS). 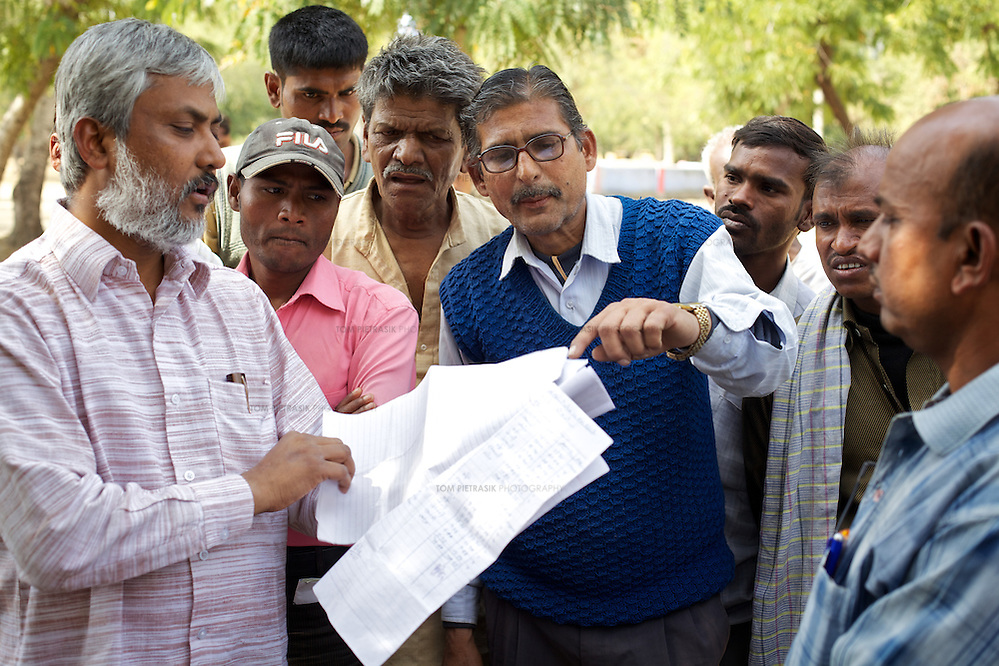 Retailers surround Rupesh (left), advisor to India’s Supreme Court Commissioner on the right to food, as he looks through paperwork with Bharat Rai (in blue), assistant manager of Atri’s ration depot. Retailers accused Rai of syphoning off food supplies that should have gone to Atri’s poorest people. Gaya District, Bihar. India ©Tom Pietrasik 2011

These retailers, who were at the depot to collect monthly supplies of rice and wheat, were keen to inform Rupesh of malpractice on the part of Bharat Rai, assistant manager of the depot. According to them, Rai had failed to supply grains specifically allocated for Atri’s poorest of the poor as part of a scheme called Antyodaya. Rai, they said, had sold this grain and pocketed the money for himself.

While Rai’s offense should not be considered commensurate with Kalmadi’s crimes, the serious implications of his alleged misconduct cannot be underestimated in a state where where 56 percent of under-5’s are underweight. 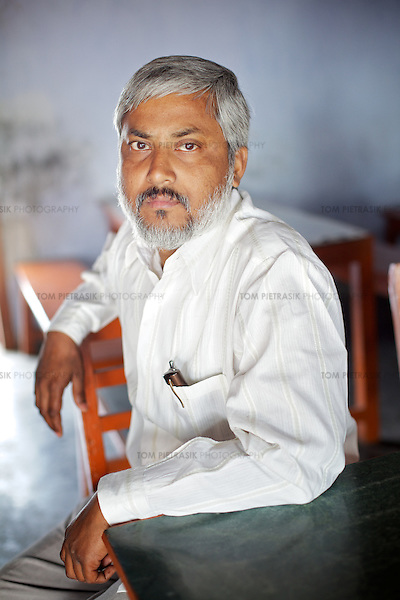 Rupesh argues that Rai must be held accountable for his own actions and has raised the case with the District Magistrate. But he insists that corruption should be considered chiefly a consequence – rather than the cause – of a deeper malaise, namely poverty and inequality. Rupesh is adamant that until these structural deficiencies are confronted, India cannot hope to build proper systems of education, accountability and justice that are prerequisites for a society free of corruption. 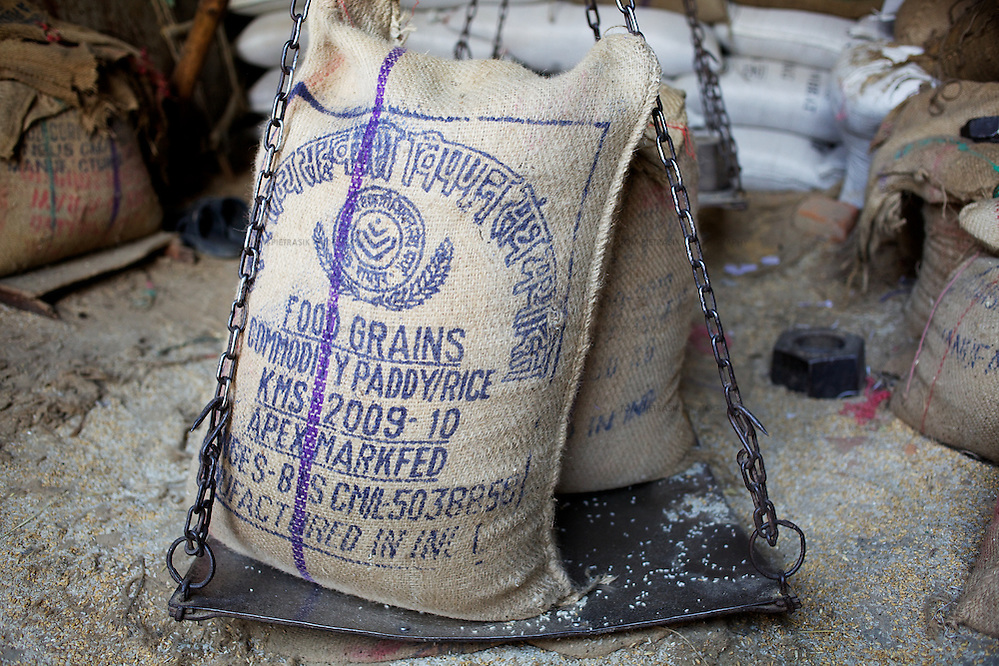