Photo above: Ela Bhatt responds to a cacophony of cheers as she arrives for a SEWA board meeting at the union’s headquarters in Ahmedebad. Gujarat, India ©Tom Pietrasik 2010

Ela Bhatt is founder of the Self Employed Women’s Association of India (SEWA), a union which represents the rights of over one million workers. She lives in the west Indian city of Ahmedebad and while I was there to photograph her last month she took me to meet some of SEWA’s members among the vegetable vendors of the city. Thanks to SEWA, these women have secured legal protection for their trade and escaped the exploitation they once suffered at the hands of the police and money lenders.

Bhatt is a small woman with a gentle demeanor so I did not anticipate the enthusiasm with which she would be received as we entered the narrow lanes of Ahmedebad’s walled city. What I witnessed was not the shallow fawning of a deity or the self-aggrandising fanfare that so often greets political leaders. Instead, Bhatt was welcomed by a spontaneous and warm display of appreciation befitting a woman who has spent forty years helping to mobilize and bring justice to a once-marginalised and factious group of workers. 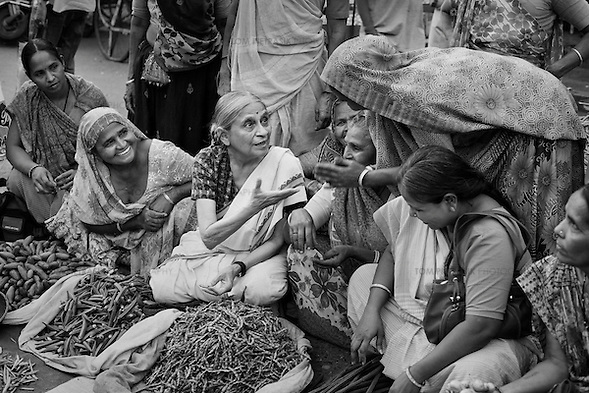 Ela Bhatt meets vegetable vendors in the city of Ahmedebad. Thanks to SEWA, such workers have won legal protection for their trade. Ahmedebad. Gujarat, India ©Tom Pietrasik 2010

Bhatt is a member of The Elders, a group of statesmen and social activists brought together by Nelson Mandela to promote peace building and human rights. In acknowledgement of her tireless campaign for worker recognition, establishing cooperatives and setting up credit unions, Bhatt has also received many honours including India’s Padma Bhushan and Japan’s Niwano Peace Prize.

This kind of establishment praise might have softened the stance of a less committed reformer, but it is clear that Bhatt remains an outspoken advocate for the kind of systemic change that is required to bring justice to the poor. Speaking to the UN two years ago, she wondered why the working poor still go hungry,

“We can blame today’s economic environment. It is indeed absurd and out of balance. It does not address simple human needs and rights like food, and water and shelter for all… Employers are constantly searching the globe for cheap labour; but the jobs they create abroad cannot build a society, or a sustainable economy. Special economic zones are nothing but glorified labour-camps that force migration and the break down of families and society. That is not nation building.”

SEWA’s grassroots membership continues to grow, reflecting a swelling of the ranks of India’s informal, or unorganised workforce. These wokers are bypassed by employment legislation because no contract exists between them and their employers.

It is a sad indictment of India’s brand of economic “modernisation” that, according to a 2009 Government report, all recent employment growth (1999-2000 & 2004-05) has occurred in the informal sector which now represents a staggering 92 percent of India’s workforce. 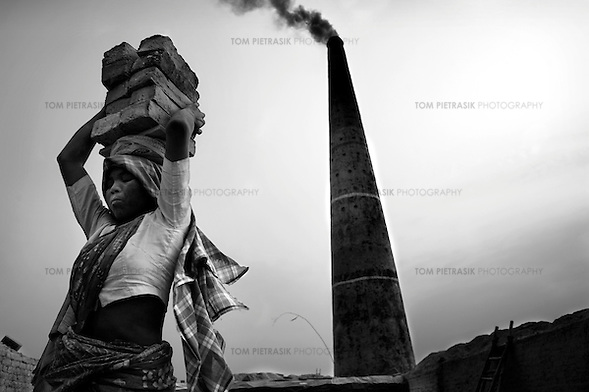 Those employed in brick kilns are not protected by employment legislation and form part of the 94 percent of India’s workforce known as the unorganised sector. Uttar Pradesh, India ©Tom Pietrasik 2006