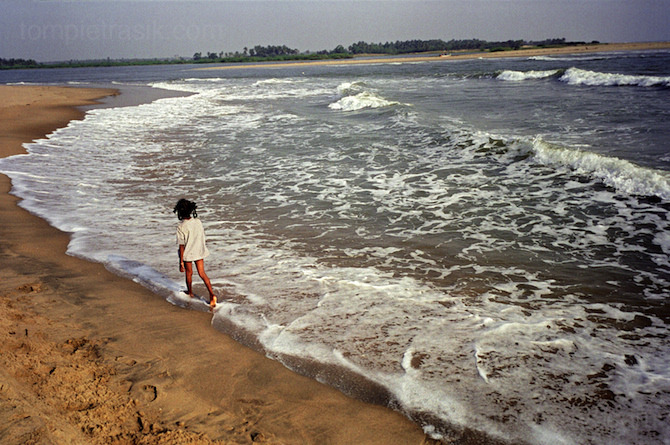 Vijitha Viswanathan (age 9), walks along the shore close to the point where her mother and brother lost their lives. This is the first occasion since the tsunami, that Vijitha has ventured close to the sea.

It is eleven months since the Asian tsunami of December 2004. In the fishing village of Thalanguda, Tamil Nadu, Vijitha, age 9, and Vijayshree, age 7, Viswanathan continue to live with their father, almost a year after losing their mother and brother in the tsunami. The most apparent change to their lives in the past five months has been the construction of a new house. This recently completed two bedroomed home cost INR250,000 (US$5,500) and was paid for out of the compensation money (totaling INR400,000 or US$8,750) the girl’s father Viswanathan received for the loss of his wife and son. Viswanathan’s new home is not the only new building in the village of Thanlanguda. Many families were compensated by the government for the loss of relatives and most of these appear to have invested in new housing. Vi