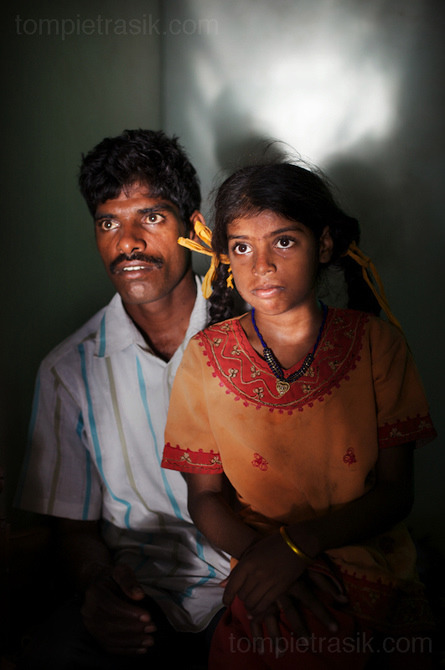 Vijyashree and her father Viswanthan at home in the fishing village of Talanguda. Viswanathan lost his wife and young son to the tsunami. He has since remarried. Tamil Nadu, India ©Tom Pietrasik 2009…

Viswanathan with his daughter Vijyashree at home in the fishing village of Thazanguda, near Cuddalore.

Vijita (age 14) and Vijyashree (age 11) Viswanathan lost their mother and brother to the tsunami in 2004. They continue to live in the fishing village of Thazanguda with their father Viswanathan, his second wife Kayalvizhi and their two children Sanjay (age 3) and Monica (age 1).

Until the beginning of the 2009 academic year in June, Vijita and Vijyashree attended the local Thazanguda school. This village school teaches pupils only until the 8th Standard and with Vijita now entering the 9th, it was decided that the two daughters remain together and both travel 3km to the local town school: the Government Girls High School, Venugopalapuram in Cuddalore.

At the same time Viswanathan decided he would cease day-to-day care of his daughters and place them in the Government Home for Tsunami Children, also in Cuddalore. This was not a move welcomed by either Vijita or Vijyashree and one afternoon after just two weeks at the orphanage, the two girls ran away. At roll call in the orphanage that evening the alarm was sounded and the two sisters were eventually located in Thazanguda waiting for their father and Kayalvizhi who were both away at the time. Realising his daughters’ unhappiness, Viswanathan then took them out of the Government home.

According to her class teacher, Vijita often compares her step-mother to her mother and concludes that she wants her mother back. Vijita confides in her teachers that her stepmother is forever demanding that she and her sister Vijyashree undertake housework. This frustration at home is tempered by the genuine love both sisters have for their father and two younger siblings Sanjay and Monica. Vijita expresses a lonelyness without her mother. Pushpavalli concludes that “Vijita wants something else beyond the love of her father and sister”.

Viswanathan appears genuinely to want the best for his two elder daughters. His experimen