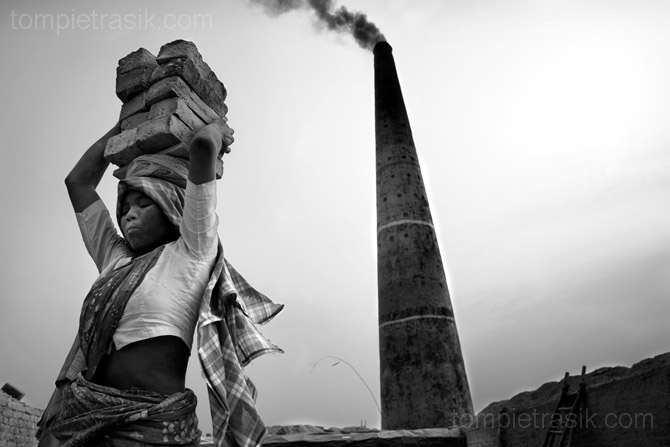 Migrant workers from the Adivasi community carry bricks from the oven to waiting trucks. This kiln is located close to Phulva Patti village in Kushinagar district. Many Musahar people from Maharajganj and Kushinagar districts in Uttar Pradesh find casual employment in local brick kilns. Other low caste and tribal communities, including Adivasis from the state of Jharkhand, work on the brick kilns. Income is based on piece-work. One Rupee is paid for every forty bricks carried from the kiln to waiting trucks. Sixteen Rupees (GBÂ¬Â£0.20) is paid for every 100 bricks moulded from the local clay. This moulding work is performed mainly by Musahar men who can expect to earn up to 160 Rupees (GBÂ¬Â£2.00) per day. Rates of pay are reduced in the winter. The day begins at 3am and finishes at 12 noon to avoid suffering the debilitating midday sun which dries the clay making it harder to handle.

Caste in India touches every aspect of life including marriage, employment, housing, education and social interaction. The practice of caste discrimination continues despite being outlawed since IndiaâÃ Ã´s independence and is particularly apparent in rural areas. In recent years the government has attempted to challenge caste-inequality by providing certain privileges to Dalits and Adivasi (tribal) communities including employment and education quotas. However, according to IndiaâÃ Ã´s National Human Rights Commission, the beneficial impact of these programs has been hindered by inadequate investment in public services and a failure to properly monitor development projects. Despite the passing of the Prevention of Atrocities Act in 1989, Dalits, Adivasis and other very low-caste communities still suffer high levels of violent crime including murder and rape. They have little recall to justice and most crime goes unpunished.