Photo above: Women wait for taxis to take them home after a day of scavenging for coal outside the Parej open cast mine. Jharkhand, India ©Tom Pietrasik 2010

At the beginning of the year, while eating breakfast one morning in Ranchi, the capital of India’s Jharkhand state, I picked up a copy of the Hindustan Times newspaper. At the top of the front page, under a headline that read, “New Year’s gift for Bokaro: Second steel plant”, correspondent Sanjay Sahay wrote,

“Bokaro is a city, where a majority of the population, either directly or indirectly, depends on the Bokaro Steel Plant (BSL) for a living. Not surprising then that union Steel Minister Virbhadra Singh’s announcement on Friday that they would consider setting up a second steel plant in the city inspired a lot of enthusiasm and hope.”

As chance would have it, I visited Bokaro the day before Sahay’s article was published. I was there to photograph those living and working around the Tata open-cast coal mine that neighbours the steel plant mentioned in his report. According to Sahay then, I should have come across a lot of enthusiasm and hope among this population who either directly or indirectly [depend] on the Bokaro Steel Plant for a living. 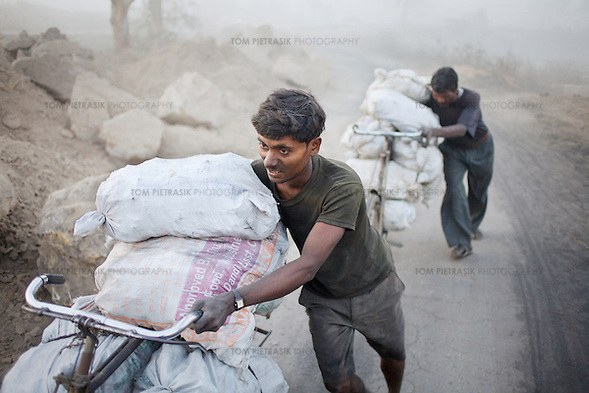 Labourers ferry coke to a local distribution point outside an illegal mine in Hazaribagh district. Jharkhand, India ©Tom Pietrasik 2010

But I didn’t. Instead I was confronted by a poor and dejected community, eking out a living on the fringes of a mine that employes few local residents. I saw women collecting coal as lumps of it toppled from the huge trucks exiting the mines. Close by, families living in grotty hovels, were selling plastic bottles of petrol to passing motor vehicles. This was trickle down economics at work, honouring those who’ve been forced to sacrifice their land in the name of growth.

Sipping my morning tea and persevering with Sahay’s article, I glanced across to the sidebar that ran alongside his words. Beneath the lofty headline, “DEVELOPMENT KNOCKS ON BOKARO’S DOOR”, was a list of planned local education and health initiatives. Upon closer inspection it was apparent that there was no substance to any of these projects. The Hindustan Times had simply regurgitated aspirations that the Government “… would seriously consider starting a medical college in Bokaro” or “SAIL (a steel company) would take a decision on establishing another degree college here.” 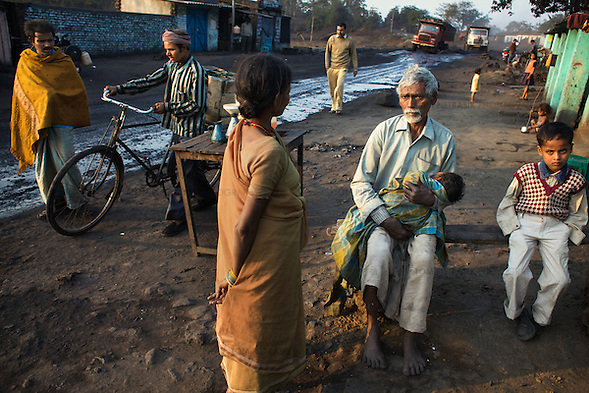 A family sell petrol to motor vehicles on an approach road to the Tata coal mine at West Bokaro.
Jharkhand, India ©Tom Pietrasik 2010

When I mentioned the Hindustan Times article to Xavier Dias of BIRSA, an indigenous people’s group, a couple of days later, his rather bleak response was that, “The extraction of minerals is a guarantee that an area will never be developed.” The tragedy is that Jharkhand desperately needs development. With only a quarter of indigenous Adivasi women able to read and an annual per capita income of just $330, there is every need for investment in local communities.

For those that pull the strings of power however, talk of development is simply a means to an end. Health and education projects matter only to the extent that mentioning them helps placate the public. Development aspirations are a tool in much the same cynical way that the specter of a Maoist takeover can be used to justify the removal of obstinate communities from their land.

There are plenty of people with a personal interest in sustaining the injustice of mineral extraction in Jharkhand. Some of them are occasionally found out. Like Jharkhand’s former chief minister Madhu Koda who currently resides in jail, charged with laundering $1.2 billion from the granting of mining licenses. Despite evidence of such shocking abuse of power, disingenuous journalists like Sahay perpetuate a myth by presenting mining companies, their industry associates and their friends in government as as benevolent brokers, bestowing largess upon a grateful public. 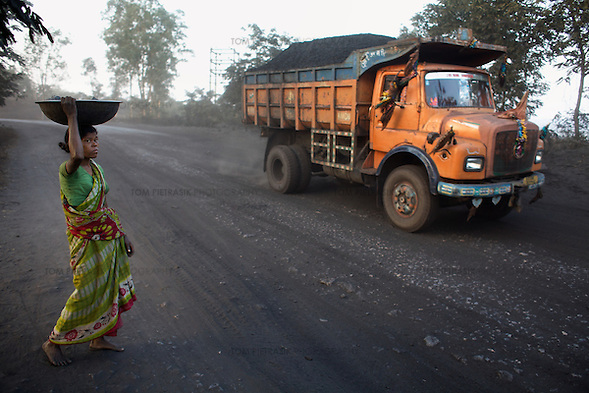 An indigenous Adivasi woman outside the Tata coal mine at West Bokaro collects coal as it falls from passing trucks.
Jharkhand, India ©Tom Pietrasik 2010

Abroad too, newspapers sustain this fiction by failing to acknowledge the hopeless conditions forced on people like those I photographed in Bokaro. When Arundhati Roy considers the “genocidal potential” of mining, The Economist newspaper rebuts her by quoting an Indian finance ministry report that declares, “High growth is critical to generate the revenues needed for meeting our social welfare objectives.” This is a cynical and lazy response when the Indian Government’s meagre spending on health and education pales alongside burgeoning revenue.

If the wealth of mineral extraction is funding social welfare spending, The Economist should ask why ordinary rural communities, like those I met in Jharkhand’s Karanpura valley, persist in a six year struggle to keep coal mining companies and thermal power plants from their land. And too why resistance groups like Jharkhand Mines Area Coordination Committee would sooner face imprisonment than capitulate to myths about development. People living in places like the Karanpura valley are not stupid. They have seen their mineral wealth shipped out to benefit others. They understand better than anyone else that local communities must be at the forefront of the decision making process if they are ever to challenge the powerful interests that exploit Jharkhand’s wealth and continue to deny human rights to those who are being forced from their land.

You can see more of my photographs of Jharkhand’s coalfields on my webstite here. 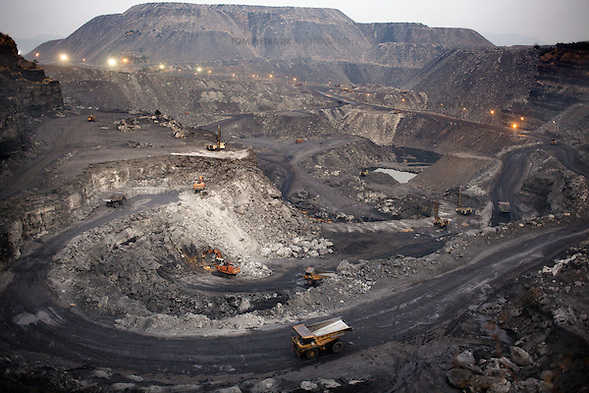 The Tata open cast coal mine at West Bokaro. Few of those employed at the mine are from the locally displaced Adivasi community.
Jharkhand, India ©Tom Pietrasik 2010

Of course exploitation in mining isn’t confined to India. Markus Bleasdale’s shocking photo essay, “The Rape of a Nation”, documenting how mining has shaped the conflict in the Democratic Republic of Congo, is displayed on the Burn website here.