At the very beginning of the year, I saw an inspiring collection photographs from Cuba by by photography partners Alex Webb and Rebecca Norris Webb at New York’s Ricco Maresca gallery. You can view a selection of these photographs on David Alan Harvey’s Burn site here. And Alex and Rebecca talk about their collaboration on their Two Looks blog here.

I am new to the images of Rebecca Norris Webb but I have long admired Alex Webb’s photographs for their ambiguity and sense of mystery. Webb’s attention to colour and composition is fundamental to his work. But for me, most impressive is his ability to capture those moments when elements outside his control converge and lend real resonance to a scene. In Two Looks, Alex and Rebecca identify this notion, describing it as serendipity or the lucky chance.

Of course good fortune falls only upon those photographers who are prepared to wait, to look and to recognise the significance of a moment. Interviewed by the Foto Tapeta website, Webb describes the process involved when he photographs,

“When I am working, then I really have to work… I really have to stay attuned… It is really about walking and feeling the situation. How do you enter the situation? Some situations you get comfortable just walking right in. Others you have to sort of dance around the edge and come in here… What I want to experience is this sudden moment of visual insight.” And it was a moment of visual insight that clearly struck Webb when two mysterious figures entered this scene in Istanbul which later became the cover for his book, “City of a Hundred Names”.

What makes this kind of photography exciting for me is the notion that these moments happen all the time. As Elliot Erwitt, Webb’s colleague at Magnum Photos, says, “You can find pictures anywhere. It’s simply a matter of noticing things and organizing them.” Of course for the most part, these “pictures” pass the world by because no one was there to capture them. Fate has intervened and occasionally presented pictures to me. Significantly it has always been during those moments when I have been patient and willing to wait, to watch and to identify a moment. 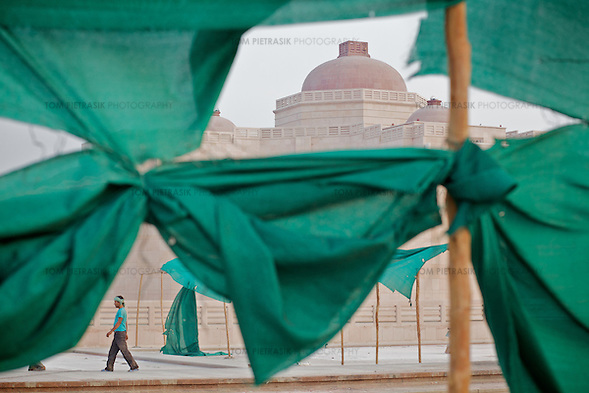 A labourer passes the memorial building in Ambedkar Park. The park was conceived by Chief Minister Mayawati as a tribute to the architect of the Indian constitution. In reality, the park exploits Ambedkar’s image. Lucknow, India ©Tom Pietrasik 2009

So it was that a man, wearing a green shirt wondered past this scene of a building site in Lucknow while I was working on a story about Chief Minister Mayawati and her Ambedkar Park for the Financial Times Magazine. 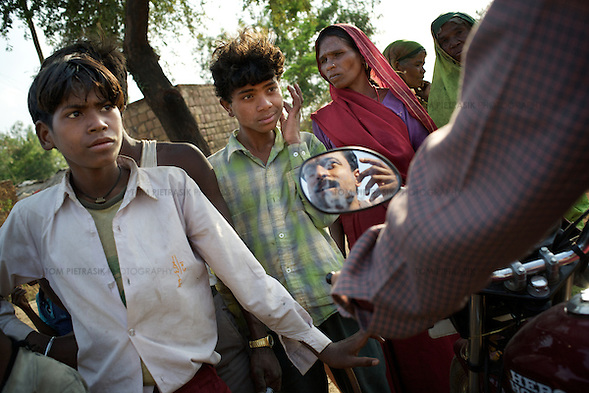 Fate had a part to play when the elements of the picture above unfolded before me and it was only last week that I noticed the Varanasi tea-lady pictured at the top of this post adopting a posture that perfectly mirrored the statue of a deity standing above her. You can see more of my recent photographs of Varanasi, including the picture below, on my website here. 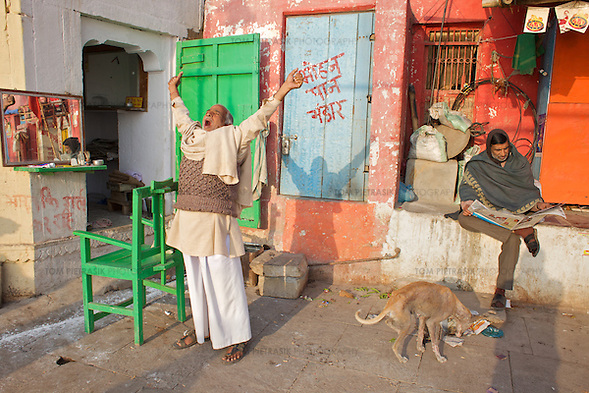 A barber opens up his shop overlooking the banks of the Ganges river.Varanasi, India ©Tom Pietrasik 2010